Embedding and emailing your tweets

I’ve tried them out for size, here are the results.

Cleverly done article (not the same tool that I used, BTW) RT @guardiantech: That Twitter embed tool – now live http://bit.ly/93sl2xless than a minute ago via TweetDeck

Cleverly done article (not the same tool that I used, BTW) RT @guardiantech: That Twitter embed tool – now live http://bit.ly/93sl2xWed May 05 12:14:30 via TweetDeck

Cleverly done article (not the same tool that I used, BTW) RT @guardiantech: That Twitter embed tool – now live http://bit.ly/93sl2xWed May 05 12:14:30 via TweetDeck

Blackbird Pie gives the best link functionality: to the person I was retweeting, the Guardian article they were citing, my tweet and my Twitter page. However, it gives the relative time (ie “less than a minute ago”), which could be disorienting for people reading your post some days, weeks or months down the line.

Publitweet’s bookmarklet comes next. It links to all of the above, except the person I was retweeting. But if you use their code as is, the font size is too big. I had to go into the code and reduce the size from 18 to 13. The whole point of the bookmarklet is that it requires fewer steps than Blackbird Pie, so it defeats the purpose if you then have to tweak the code – something I prefer not to do, anyway.

One point where Publitweet compares favourably with Blackbird Pie is that it gives the absolute date and time.

I’d rank Tweetshots in third place. It doesn’t mimic the look of my blog, as the other two do. And all of the links take you back to one place: my tweet. 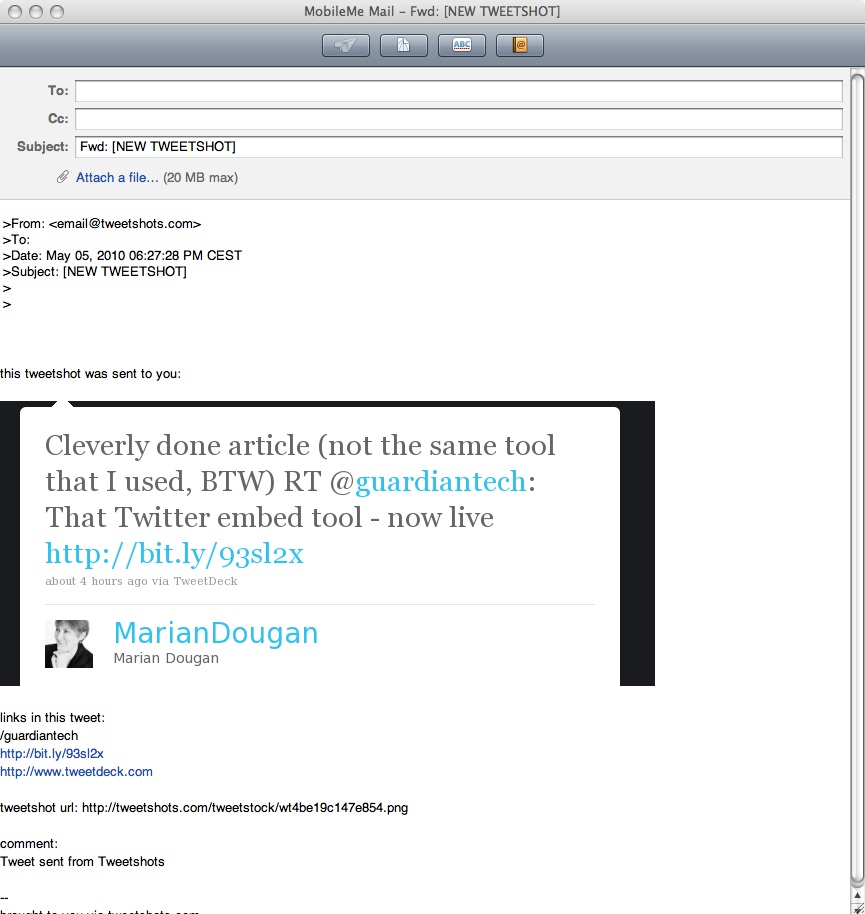 I love to think of all the developers out there making free apps to enhance our blogs and social media lives. Have you tried these or similar tools? How do you think my embedded tweets compare?