Carobs are a girl’s best friend 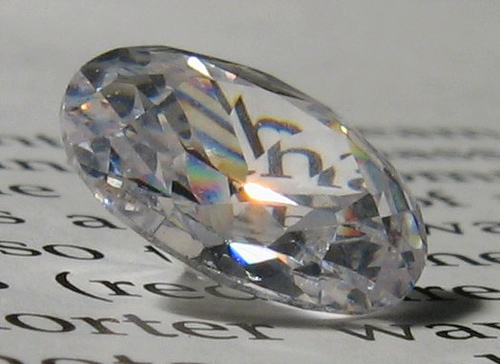 You know you’ve got problems when you’re flicking through a jewellery catalogue and your eye homes in on the etymology tidbits rather than the diamonds.

The tidbit in question comes from the Hamilton and Inches catalogue:

The word “carat” when applied to gemstones is a unit of weight. It is a distortion of “carob”: the carob bean weighs a reliable one fifth of a gram and could therefore be balanced in the weighing pan against an equivalent weight of gemstones and a deal could be struck.

Here’s the full etymology (from the Online Etymology Dictionary):

mid-15c., from M.Fr. carat “measure of the fineness of gold” (14c.), from It. carato, from Arabic qirat “pod, husk, weight of 4 grains,” from Gk. keration “carob seed,” lit. “little horn” dim. of keras “horn.” Carob beans were a standard for weighing small quantities. As a measure of diamond weight, from 1570s. The Gk. measure was the equivalent of the Roman siliqua, which was one-twentyfourth of a golden solidus of Constantine; hence the word took on a sense of “a proportion of one twentyfourth” and became a measure of gold purity (1550s). Eighteen carat gold is eighteen parts gold, six parts alloy. It is unlikely that the classical carat was ever a measure of weight for gold.

Back to diamonds. Here’s the Online Etymology Dictionary again:

Hamilton and Inches describe them thus:

Diamond, the hardest substance in nature, is made of carbon. Ideally they are flawless and colourless – or naturally coloured by, say, boron (which turns them blue), or a slip in the atomic lattice (which makes them pink).

“A slip in the atomic lattice” — isn’t that lovely? Atomic lattices refer to the arrangement of atoms into a crystal structure (thank you, Wikipedia). They feature (as graphene, another form of carbon — less glamorous than diamonds, but pretty amazing) in this year’s Nobel Prize in Physics, won by Andre Geim and Konstantin Novoselov (University of Manchester, UK). You can see diamonds’ atomic lattice in the University of Leicester’s Crystal Atomic Lattice Viewer (make sure you rotate the structures — it’s really cool!).

If you can’t afford diamonds this Christmas, you can read about them and do some good at the same time. Hamilton and Inches are taking part in the Stone Paper fund-raising initiative, along with author Alexander McCall Smith and 500 Miles, the charity (founded by Olivia Giles) that supports amputees and other disabled people in Malawi and Zambia. I haven’t seen the Stone Paper book but imagine it will be pretty entertaining. All proceeds from the sale of  the book will go to 500 miles.

The image is by Anne (Afternoon Sunlight) and features the diamond’s “fire”, “which shows up in the rainbows around bright spots, and in the coloured fringes on text”.